Sarawak to get a new Chief Minister

Taib’s friend to take over as Sarawak Chief Minister while one of the nation’s longest serving politicians takes over the Governorship of the state. http://borneoinsider.com 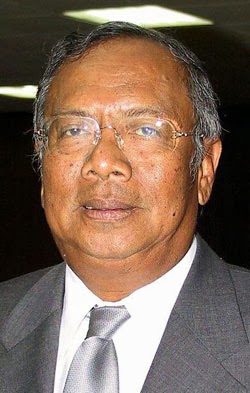 KUCHING: Adenan Satem is the man of the moment in Sarawak. He will be sworn in as the state’s new chief minister just over two weeks from now on Feb 28.
Adenan, 70, will take his oath of office before Yang di-Pertua Negeri Abang Muhammad Salahuddin Abang Barieng on the final day of his extended tenure as Governor.
On the same day, departing Chief Minister Abdul Taib Mahmud will become the new Yang di-Pertua Negeri. He will be sworn-in before the Yang di-Pertuan Agong on Feb 28.
Taib, 78, handed over notice of his resignation to Salahuddin at the Astana Negeri this afternoon.
He also officially informed the Governor that Adenan would be the new chief minister.
Speaking to reporters after seeking an audience with the Governor, Taib explained that Adenan, currently Minister with Special Functions, has wide administrative experience.
“He is the right man for the job,” he said.
Taib said he will also resign from his Balingian state seat in March setting the stage for a by-election.
He said that leaders of the state Barisan Nasional component parties have backed Adenan’s elevation to the chief ministership.
“They have assured me they will give their full cooperation to him,” he said, adding that PBB leaders will also extend their cooperation to him.
“I have no doubt about their assurance,” he added, pointing out that those who gave the assurance are deputy president II Abang Johari Openg and senior vice president Awang Tengah Ali Hasan.
Taib also gave an assurance to the people of Sarawak that the state is in the hands of capable leaders.
“There is no need to worry, ” he said, pointing out there would no change in the present policies and directions under Adenan.
He said that he had laid a solid foundation for the team under Adenan to follow.
“(Even) if there are changes of policies and directions, I don’t expect it to be drastic,” he added.
Rumours about Taib’s impending resignation as the chief minister began after Salahuddin’s term was extended in December by just three months to end on Feb 28.
Confirmation came during the PBB supreme council meeting last Saturday, with an announcement that Taib would step down as chief minister, the post which he has held for 33 years.
The supreme council also gave Taib a mandate to choose someone of his choice to be his successor.
Taib’s choice of Adenan is no surprise. They have been friends for decades. Adenan served as Taib’s political secretary when Taib was in the Federal Cabinet. He will be the fifth chief minister of the state since Sarawak united with Sabah, Malaya and Singapore in 1963 to form Malaysia.
at 8:36:00 am