Mathurin Daim, former District Officer of Sipitang, former member of the United National Kadazan Organization (UNKO), former secretary to Chief Minister Peter Lo and a former USNO man has today left us all to return to his Creator.

The North Borneo Herald offers its deepest condolences to all his family members. It is hoped that his vision to see the creation of the Borneo National Party (BNP) will one day be realized.

His remains will be buried at the Limbahau Catholic Cemetery in Papar on Friday
at 1pm.This story from HERE http://northborneoherald.blogspot.com/

M'sia in the Club of Doom says ex-Chief Minister Harris 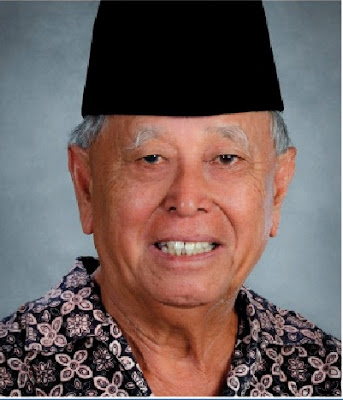 By Joe Fernandez as posted on Sept 15, 2010 at http://www.freemalaysiatoday.com/

KOTA KINABALU: Former Sabah chief minister Harris Salleh sees Malaysia's existing political and administrative system as heading towards a "failed state status" within the next 20 to 30 years. He described these states as the "Club of Doom".

However, he rules out the system in Malaysia changing from within or on its own as "it's so entrenched that it's difficult, if not impossible (for it), to change".

"It's on public record that many leaders who have reportedly committed wrongdoings are being elected again and again," said Harris. "These wrongdoings have been widely reported in the media."

Harris' remarks were delivered in a prepared pre-Aidilfitri talk on leadership to students, in a run-up to Malaysia Day tomorrow, at Universiti Institut Teknologi Mara (UiTM) here. His talk just became available to the media.

"The main contributing factor is that the voters are not politically and economically independent," said Harris. "The voters depend for their livelihood on political patronage."

Race and religion, he said, played the most important part in selecting a leader.

Reiterating the central theme in his talk that the present system was dated, he opined that the country had the largest number of restrictive laws and policies, quite a number exceedingly harsh, "and not conducive for the citizens to move forward".

Malaysia also had the largest number of "this and that", he pointed out.

"Surely, all these are not conducive for the citizens to move forward."

'Possible to change for the better'

Harris expressed confidence, without getting into any specifics, that it is still possible for the country to change for the better, but only once the voters are politically and economically independent.

"Once this is attained, a responsible leader will emerge and lead the country," he said.

"Then there will be good laws and policies."

Harris, who dropped out from school after Year Six, described a policy as an extension of the law and a guideline for the implementation (resolution) of a particular issue "and should be the best for any particular issue and for the people".

He used three examples from his Berjaya administration (1976-1985) to explain what good policies are in a government: giving all schoolchildren free uniforms, shoes, books pencils and a packet of milk a day; giving and alienating 15 acres of land each to every landless Sabahan; and increasing the payment of dividends from Yayasan Sabah (Sabah Foundation) from RM100 to RM200 per annum.

"These policies helped almost everyone but they were abolished or revoked by
successive governments," said Harris.

"Thus the schoolchildren, the landless and Sabahans have been deprived."

(The school milk programme in Sabah has been reinstated but only three times a
week and confined to Years One to Three.)

Instead, he alleged the lands earmarked by his administration were given away by PBS to
local companies which promptly sold them (for a quick profit) to companies based in Peninsular Malaysia.

Denying that he was making up stories, Harris said that Joseph Kurup -- who left PBS in 1994 to form Parti Bersatu Rakyat Sabah -- revealed all the land details in 2003 amidst allegations that Sabah was the poorest state in Malaysia.

Harris attributed the poverty in the state to, among others, the 60,000 landless growing to nearly 200,000 over the last 27 years.

"The revocation of Berjaya's land policies by the succeeding PBS administration has made Sabah the poorest state in Malaysia over the last 20 years," said

Harris. "Sabah is an agricultural state and an overwhelming number depend on the land for their survival."

Sabah's descent into poverty from being the second richest in Malaysia, said Harris, proves that there's no guarantee that laws and policies made by responsible leaders will be honoured by their successors or successor governments.

"Unfortunately, irresponsible successive leaders and governments have deemed it fit to abolish and revoke important policies for the people."

The former chief minister urged "the eminent professors and lecturers" of UiTM to research the poverty of Sabah and relate it to the successive state governments since independence and their various laws and policies.

Harris expressed no surprise that "even good laws and policies" are often revoked by government leaders.

"Politics has become big business in Malaysia," he explained. "People go into politics not to serve the country but to use it as an avenue to enrich themselves."

The rest of Harris' talk on Malaysia was devoted to Sabah, which he described as an example of what's going wrong elsewhere in the country.

He urged Sabahans and Malaysians to stand up for the truth and "call a spade a spade", citing a saying: "All it takes for evil to triumph is for good men to do nothing."

He observed that many people at all levels including students, just appear to be condoning – "by their inaction" -- whatever (wrong) is happening around them.

He warned that there will be nothing left for Sabahans within the next 20 to
years except the crumbs and leftovers "if nothing is done today to put things
right". "Leaders, after skimming the wealth of the state within a short time,
migrate to other countries," said Harris.

"With their political patronage and connections, some of the people have managed to make a lot of money within a few years."

There are forces at work who are not bothered what happens to Sabah and Sabahans, added Harris. "Their business is not in the production of goods and adding economic value but to act as go-betweens and enrich themselves and others in power."

This state of affairs, said Harris, "cannot and should not be allowed to go on".

Eric, a former District Chief and ex-Chief Judge of the Kota Kinabalu Native Court, is Sepanggar Member of Parliament. He won the seat in the last general election, at that time, SAPP was still a component member of the Barisan Nasional Government.

The sitting District Chief of Kota Kinabalu OKK William Majimbun (left), a young brother of Eric, is tipped to be proposed by PBS to contest for Barisan Nasional for the Sepanggar MP seat. William is a PBS supreme council member.

Umno is also eying to contest the seat and the likely candidate will be the Sepanggar BN chairman Jumat Idris.

And yet another Barisan Nasional component party member UPKO is also said to be proposing one of its supreme council member to contest for the seat. Whoever the Barisan candidate will be, he of she will have to face SAPP president Datuk Yong Teck Lee. Yong, a former Chief Minister, was Gaya MP and one time the Assemblyman for Likas.

Latest talk....
A friend called me saying that Datuk Yong might contest the Likas seat while incumbent Assemblyman Datuk Liew Teck Chan will go for Sepanggar MP seat.
at 9:47:00 am No comments:

As published in http://www.freemalaysiatoday.com
on Mon, 30 Aug 2010 12:21
It will be a fatal mistake if opposition politicians from the peninsula ride roughshod over the sensitivities of the people of Sabah.
It is well known that the land below the wind (now the land of illegals) has long been seething with anger at the federal masters.
Rich in natural resources, bigger than the peninsula, they should be enjoying the fruits of their natural wealth and holding the future in their hands. Instead, fate was unkind to them and today
they live under the yoke of "alien" rule.
For a brief spell, they had power but because of the machination of a devious dominant peninsular party, they lost their high seat. Though their politically emasculated Huguan Siou (paramount leader) now sits at the same table with the hated "conquerors", life there does
not seem to change for the better.
In PKR the people have found another promising platform to advance their cause. The party is open to all races and in Sabah it has made quite an impact. Its standard-bearer is a fighter for justice and fair play though his future is nebulous.
By forging a link with one of the favourite sons of Sabah, the way ahead looks clear and bright. The partnership seems solid and PKR appears to have hit off well with the crowd. But to their dismay, PKR is behaving more like its peninsular foe. It wanted to impose its own brand of leadership on its partners.
In short, it wanted peninsular politicians to run the show in Sabah. It met with stiff opposition.

Though the error was rectified with Sabah's favourite son in control of his State, the ceasefire did not last long. It was bound to happen: some disgruntled members got together to form a breakway party and fight their own battle.

They nearly got away with it if not for the peace deal reached with PKR. But dirty politics intervened. Imperiously, PKR came down hard on the rebels with the recommendation that they be suspended. It acted tough and rough.

The damage wasdone and another blunder committed. PKR had acted in a manner that reminds its Sabah brothers of the treacherous peninsular politics.

Even if the recommended suspension is not acted upon, the undercurrent of distrust will persist. The dissidents have made their point and Sabahans, inside and outside the political arena, have taken note of the haughty yet fragile opposition party from the peninsula.

If the rebels are shown the door in a display of extreme petulance, it would not sound the death knell for Sabahans.

It would instead strengthen their resolve. If the PKR supremo in a magnanimous gesture brings them back to the fold, it would do nothing to calm the troubled waters. Whichever way the story is played out, the stark reality is that Sabahans, irrespective of their political leanings, simply do not want peninsular leaders talking down to them.

PKR must know that it cannot dictate terms to its Sabah partners. Dissidents, present and future, will rise up to challenge the party of justice. They are not acting alone. Behind them are the people, now living in misery, who are keen to support any "parti that cinta Sabah".

They are raring to toss outsiders, current and impending, into the sea. PKR must not misread the political undercurrents in Sabah, or worse still, underestimate the intelligence of the people. Political awareness there is intense.

Hit a Sabahan politician and you take on an army behind him.

Sabah does not need to hold PKR hands to walk down the corridors of power when the current puppets are thrown out of office. The destiny of the state lies in its own hand. Peninsular style of politics is not its cup of tea. Sabah is not a wild cowboy country that must be tamed by the "western" gunslingers.

There are sensible, intelligent, upright local-born leaders who can lead the state to
fairer climes, calmer seas, clearer future.