Sabah’s population growth rate is almost twice higher than the national average of about 3.2%. Why is this so? EDWIN BOSI of DAP enlightens us.

WHEN Sabah, Sarawak and Malaya merged to form Malaysia, Sabah contributed about a third of the land mass.

It is therefore interesting to analyse the “breeding” pattern of Sabahans.

It was during this time there was armed conflict in the southern Philippines. The influx of refugees into Sabah may be the reason behind the sharp upward spike.

The Berjaya era came from 1976–1985. Again there was a huge population growth, above 4%. The conflict in southern Philippines continued and more refugees streamed into Sabah.

So what was a plausible explanation? There was a huge increase in the number of Indonesians working in the oil palm plantations and this could be attributed for the massive jump in the population of Sabah.

Sabah’s population growth rate is about twice higher than the national average. But why do population surveys indicate Sabahans are multiplying like rabbits?

No Kadazan, Dusun section in The Herald: Permit renewed

Catholic paper in 'Allah' row gets new permit
Reports from Malaysiakini on Nov 15, 09 1:37pm
Catholic newspaper
MCPXThe Herald will be allowed to continue publication after the government withdrew a controversial decision to cancel its publishing permit, the editor said today.
The Herald said earlier this week the government had told it that its permit for next year had not been approved. Under Malaysian law, all publications must renew their permit every year.
The move came amid a long-running dispute over the weekly's use of the word "Allah" as a translation for "God" in its Malay-language section. The government argued "Allah" should be used only by Muslims, who dominate the country's population.
The Herald's editor, Father Lawrence Andrew, said government officials in a meeting Friday said the paper's permit would be approved, but rejected its request to publish a supplement in a language used by indigenous group on Borneo island.
"They have asked us to ignore the September letter which says the permit is not approved and stick to an earlier letter in August stating a new licence will be given, there is no more confusion," he told AFP.
"On our application to publish an additional page in the Kadazandusun language, we are sad it has been rejected. We will put the plan on hold and won't be using the language for the time being," he said.
It was a miscommunication
A home ministry official confirmed The Herald was allowed to continue publishing, and attributed the controversy to "miscommunication".
"We are processing their permit renewal. We never disapproved their application, (the September letter) was due to miscommunication but it has all been solved now," said the official, who requested anonymity.
"We only rejected their application to publish in the Kadazandusun language," he added.
The Herald, circulated among the country's 850,000 Catholics, nearly lost its publishing licence last year for using the word "Allah". The paper is printed in four languages, with a circulation of 14,000 copies a week.
The row is among a string of religious disputes that have erupted in recent years, straining relations between Muslims and minority ethnic Chinese and Indians who fear the country is being "Islamised".
Religion and language are sensitive issues in multiracial Malaysia, which experienced deadly race riots in 1969.
- AFP
at 3:47:00 pm No comments:

Herald still has its permit?

This story is from HERE

The Home Ministry clarified that The Herald's permit for publication has not been revoked and that the renewal of its permit for 2010 is in process.
"There was never an issue of revoking the permit for The Herald," explained an official from the publication control and Al-Quran text division.
He told Malaysiakini that the last letter sent to The Herald in September was a notification that the application to publish in the Kadazan-Dusun language was not approved, and that a refund of the permit fee could be made.
The reason being, he said, is that The Herald paid its permit fees too early."We will only process the permit three months before the old permit expires, as in this case it is in January 2010.
The ministry will give the option for a refund if monies were paid prior to the three months.The official said that it was a norm for the ministry to send applicants a letter to remind them of an option to claim refunds for fees paid too early.
This is so they could pay the ministry closer to the expiry date.He said that the confusion arose from a misunderstanding, stressing that the Home Ministry did not have issues with The Herald.
He also added that the 'Allah' ban is a pending court case and should not be tied to the issue of the permit.Herald insists permit application was rejected.
Meanwhile, the letter that was sent from the Home Ministry on Sept 3 was titled Refund for the publication titled Herald-The Catholic Weekly'.It further reads: "This is to inform you that the application for the change of language is not approved. Therefore, the Ministry will refund the money that was paid."And the letter further goes on to explain the procedure to obtain the refund.
Editor of The Herald, Father Lawrence, however, declined to comment on the explanations given by the Home Ministry, as there will be a meeting between the parties later today."I do not want to comment on this. All I am saying is, I have the letter and let the facts speaks for themselves," said Father Lawrence.
Earlier this week, there were reports that the Home Ministry has cancelled the approval of the renewal of the permit to The Herald.Father Lawrence was mystified as to why the approval was cancelled as no reasons were given.
The Herald newspaper, circulated among the country's 850,000 Catholics in four languages, nearly lost its publishing licence last year for using the disputed word.The Roman Catholic Church is still waging a legal battle, which started two years ago, with authorities over the use of the word 'Allah'.
at 9:09:00 pm No comments:

The Herald lost its publishing permit

KUALA LUMPUR: Malaysia’s weekly Catholic newspaper has lost its publishing permit for next year amid a long-running dispute over its use of the word "Allah", the editor said Thursday.

The loss of The Herald’s permit comes as it prepares for a High Court hearing on December 14 in a legal battle between the Catholic Church and the authorities over the use of the world "Allah" in the paper’s Malay-language section.

The government has argued that the word "Allah" should be used only by Muslims, who dominate the population of Malaysia.

"It is very confusing. One letter in August said we have the licence to print (in 2010) and the next thing is we receive a letter in September saying the permit is not approved. Something is amiss," The Herald’s editor, Father Lawrence Andrew, told AFP.

Father Lawrence said the home ministry cancelled the new permit without any reason.

The Roman Catholic Church has waged a two-year legal battle with Malaysian authorities over the use of the word "Allah".

The priest said he had met with home ministry officials last month to resolve the issue but declined to elaborate.

Home ministry officials could not be immediately reached for comment.

The Herald newspaper, circulated among the country’s 850,000 Catholics, nearly lost its publishing licence last year for using the disputed word.

Asked if The Herald would be available in January 2010, he said: "I hope it will be there."

The newspaper is printed in four languages and has a circulation of 14,000 copies a week.

The row is among a string of religious disputes that have erupted in recent years, straining relations between Muslim Malays and minority ethnic Chinese and Indians who fear the country is being "Islamised".

Religion and language are sensitive issues in multiracial Malaysia, which experienced deadly race riots in 1969.

About 60 percent of the nation’s 27 million people are ethnic Malay Muslims, who dominate the government.

The rest of the population includes indigenous tribes as well as ethnic Chinese and Indians — practising Buddhism, Christianity and Hinduism, among others.

More than half of Malaysia’s Catholics are from indigenous groups, most of whom live on the Borneo island states and who mainly speak Malay. 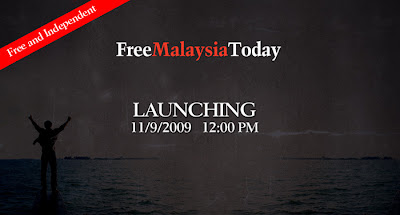 Looking forwrd to reading hot news in this new portal..

Najib, who will be accompanied by his wife, Datin Seri Rosmah Mansor, is scheduled to open three meetings of Barisan Nasional component parties in Sabah during the visit.

On Sunday, he would attend the Liberal Democratic Party (LDP) congress at 1Borneo, near here, have lunch with Sabah Umno leaders and open the United Pasokmomogun Kadazandusun Murut Organisation (Upko) national convention at the Penampang Cultural Centre hall before returning to Kuala Lumpur. - Bernama 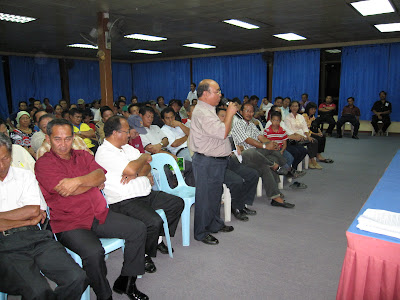 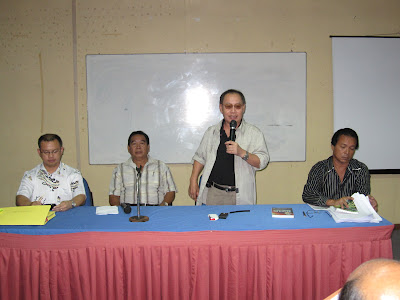 But he deferred it to another day pending further development in the Opposition party, in particular, actions by Datuk Seri Anwar Ibrahim on the party's leadership issue in Sabah.

"PKR national leader wanted me to consider or postpone ditching PKR, they called on me and supporters to continue to be in PKR fold's." he told a gathering of PKR local leaders at the Tambunan Village Recreation Club in Tambunan on Nov 5, 2009.

However, he said whatever will be his next move, it would very much depend on the wishes of his die-hard supporters in Sabah. More than 200 PKR leaders, among them divisional and branch heads, attended the gathering.

Ong Tee Keat enemy of the people of Sabah & Sarawak

A Government member of Parliament from Sabah has branded the Federal Government, MCA president and Transport Minister Datuk Ong Tee Keat as the enemy of the poor people in Sabah and Sarawak for imposing a policy to have cars aged more than 15 years go for mandatory roadworthiness inspection from next year. Datuk Dr Marcus Mojigoh, UPKO Putatan MP, described the new policy as ridiculous and annoying as well as burdening especially to the people of Sabah and Sarawak. He said it should not be imposed in the two States as yet. He said owners of such cars were mostly poor in the rural areas where there is no Puspakom branch. "This minister is a rich man, Please ask him to replace our cars. He is becoming the enemy of the poor people. The poor people are not happy as the policy will render them losing their only mode of transportation," Mojigoh told Daily Express' journalist Chris Maskilone in Kota Kinabalu Sunday.
at 9:33:00 am No comments: