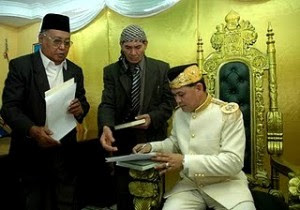 KOTA KINABALU: An 82-year-old man of Filipino descent has accused local businessman Mohd Akjan Ali Mohammad of fraud for claiming to be a direct descendent of the Sultan of Sulu.
Wan Mohammad Undas, whose daughter Wan Limbisah lodged a police report on the matter on Saturday, said Akjan is not a relative of any of the sultans of Sulu. He also accused Akjan, an Umno member, of having come to Sabah from the Philippines decades ago although he allegedly has a MyKad stating that he was born in Sabah.
"Akjan is only an ordinary Filipino man. He was employed as a car washer when he first come to Sabah decades ago.
"He mingled with the late (Sabah chief minister) Datu Mustapha (Harun) to gain popularity among the local politicians," said Wan Mohammad.
Wan Mohammad, who claimed that his great grandfather originated from the Philippines, said he came to know about Akjan's background from Sharif Osman Abu Bakar, Sultan Mohammad Yakub Sultan Alimudin and Sultan Jamalulul Kiram, when the trio went to the former's house during a recent tour of Sabah.
"They do not recognise Akjan as a relative of any of the sultans of Sulu," said Wan Mohammad.
Wan Mohammad said that he had come forward because he felt it was unfair to other Filipino refugees who migrated to Sabah during Ferdinand Marcos regime and who may be drawn into recognising Akjan as the sultan of Sulu.
"If Akjan can claim himself as a descendant of the sultan of Sulu, it is not impossible other Filipinos who are now Malaysian citizens to also claim
themselves as sultan of Sulu," added Wan Limbisah.

Wan Limbisah lodged the police report a week after Akjan and a self-styled "interim government" of Sulu claimed he is the sultan of Sulu.
"His action will mislead the Sulu community in Sabah including the local people," said Wan Limbisah.
She added that if Akjan wanted to claim the throne of the sultanate of Sulu, he should have returned to the Philippines and held his coronation there.
Wan Limbisah urged the relevant authorities to take appropriate action against Akjan, a former ISA detainee who is alleged to have been involved in distributing Malaysian identity cards to his countrymen and other foreign nationals.
at 9:12:00 am No comments:

Kong Hee Fatt Choi to all readers/visitors
at 10:14:00 am No comments: