KOTA KINABALU: Batu Sapi Member of Parliament Edmund Chong, 54, was killed in a
road accident Saturday (Oct 9, 2010). He was reportedly riding a high-powered
motorcycle along Jalan Coastal, Tanjung Aru, at 11.40am on a highway in the city
when he crashed into an oncoming car.
Chong, who is a consultant engineer by profession, leaves a wife, Linda Tsen
Thau Lin, 54, and four children -- three daughters and a son, aged between 13
and 23. Two of his children are studying abroad.

He was the treasurer-general of Parti Bersatu Sabah (PBS) and the party's
Elopura division head. He is a consultant engineer by profession.

Chong, who was born in Sandakan, became an MP after winning the parliamentary
seat of Batu Sapi uncontested in the 2004 general election.

"We are investigating. Preliminary investigation revealed a dent on the right
side of the Mercedes (car) due to a collision," he said when contacted.

Ahmad Sofi said the driver of the car was slightly injured.'A committed leader'
Putatan MP Marcus Mojigoh said he and Chong were to have travelled together
tomorrow to Kuala Lumpur to attend the Dewan Rakyat session beginning Monday.

Chong was returning to his house in Taman Likas Jaya from the Kota Kinabalu
International Airport after buying his flight ticket when the accident happened,
he told reporters at Queen Elizabeth Hospital.

"I was told he went to the airport to get his ticket. We were supposed to leave
for KL tomorrow together. I believe he wanted to stay at the Legend Hotel where
I am also going to put up.

"I did not think this will happen. I had advised him to be careful (when riding
the motorcycle). We have all lost a friend and will miss him," said Marcus, who
was almost in tears.

Marcus, who is the treasurer-general of Upko (United Pasokmomogun Kadazandusun
Murut Organisation), said Chong was a collector of motorcycles. "It was his
hobby. He has got a few motorbikes," he said.

Sabah Resource Development and Information Technology Minister Yee Moh Chai, who
is from the PBS, said Chong's death was felt not only by the family but also by
the people of Batu Sapi.

Deputy Minister in the Prime Minister's Department and Sandakan MP Liew Vui
Keong said Chong was well respected by the people of Batu Sapi and Sandakan.

"He also carried out his work efficiently as chairman of the Commercial Vehicle
Licensing Board (LPKP) Sabah, which comes under my purview in the Prime
Minister's Department.

"It is a great loss to Sandakan, to Sabah and to the nation. At this moment, my
thoughts are with his wife and the family who, I pray, will find strength and
solace to carry on at this very difficult time of theirs," he said.

He said Chong was once tempted with "millions of ringgit" to cross over to
another party but declined the offer.

Ongkili said Chong was one of the key PBS assemblymen who provided unfailing
support and stability for the reinvention of the party during the post-1994 era.

"It's a tragic loss for the PBS, the Barisan Nasional and Sabah. In executing
his duties as an elected representative, he spoke with boldness and sincerity
regarding the rights and needs of his constituents.

"Sometimes, his words were not palatable to some friends and colleagues but he
always meant well. He was a great personal friend, although at times we had to
agree to disagree on certain issues in politics," he said.

Ongkili said Chong would be deeply missed by his loving family, comrades in the
PBS and colleagues in Parliament.

Sabah Chief Minister Musa Aman described Chong's death as a great loss for the
people and state of Sabah.

"He was a dedicated and committed leader in discharging his responsibilities as
the Member of Parliament for Batu Sapi," he told reporters when approached at
Queen Elizabeth Hospital.

Musa, who is the State Barisan Nasional chairman, said he and his family
extended condolences to Chong's family and PBS.

PBS president Joseph Pairin Kitingan, who was also at the hospital, said: "It's
very sad for the state and the country, especially PBS. He was my close friend."

"It is something which I never thought would happen. I pray all the time that
nothing like this would happen.

"Chong, as an MP and the party's treasurer-general, had always been concerned
about the future of the country and the state," he said, adding that they last
met during the Economic Transformation Programme (ETP) open day here on
Thursday. 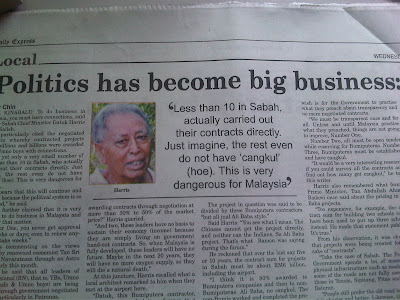 Former Sabah Chief Minister Datuk Harris Mohd Sallah (1976-1985) said Malaysians entering politics are not out to serve the people but use it as an avenue to enriching themselves with some of them making lots of money within a span of few years.

"Their business is not in the production of goods and adding economic value but act as a-go-betweens and enriching themselves as well as some people in power," he told Mary Chin, a journalist with Daily Express, Sabah's oldest and independent newspaper established in 1963.

Harris, who headed the Parti Berjaya Government until toppled by Tan Sri Joseph Pairin Kitingan's Parti Bersatu Sabah (PBS) in 1985, asserted that after enriching themselves the politicians migrate to other countries.

He said in tha case of Sabah, there were forces at wortk that `are not bothered and do not care whatever happenes to Sabah and Sabahans.

If SAPP forms the next State Government

It will implement land reforms. The party president Datuk Yong Teck Lee said agricultrual land will only be given to locals and not leased out to private companies from Peninsula Malaysia.
A committee on this matter will be headed by Sepanggar MP Datuk Eric Majimbun.
SAPP is contesting more than 40 of the 60 state seats in the next general eleCtions and is confident of winning to form the State Government to topple tne current BN Government.
at 6:28:00 am No comments: