Home for victims of human trafficking in Sabah

A safe house for victims of human trafficking will be opened at an undisclosed location here very soon - the first of its kind in Sabah.

State Assistant Community Development and Consumer Affairs Minister, Herbert Timbun Lagadan, said the fully-protected house capable of accommodating up to 20 people at a time would come under the Ministry.

The place was gazetted for the purpose at the end of last year, he told reporters after representing Minister Datuk Azizah Mohd Dun in opening a strategic planning workshop for facilitating the formation of Sabah's anti-human trafficking committee at Hyatt Regency Kinabalu, in Kota Kinabalu yesterday.

"This shows the State Government has been very proactive in providing for those falling victim to human trafficking ... the place is meant basically for those women abused this way," said Herbert.

With the opening of the safe-house, victims would no longer have to be sent to such facilities in the peninsula, like what happened in one or two cases last year.

The cases he mentioned involved foreign women in Sabah who claimed to have become victims of human trafficking.

On Sabahan victims of human trafficking in Singapore, Herbert said the Ministry is gathering details on the matter. "We will act appropriately (once all this is completed)," he said.

Meanwhile, in her speech read by Herbert, Azizah said the State Government is also ready to assist the Anti-Human Trafficking Council (Mapo).

"If the Federal Government takes seriously the human trafficking issue, the State Government also will not just take a 'sit and look' stand," she said.

Citing the proposed formation of a State-level anti-human trafficking committee as an example, Azizah said it would be similar to the national-level Mapo and vital for Sabah.

"(Because) Sabah is another main point of entry to this country. At the same time, Sabah attracts many foreigners seeking work in the plantation industries and we need to ensure 'human trafficking' does not occur among migrant workers," she said.

To effectively prevent and eradicate it, efforts should be started with awareness because when people are aware about this issue they will definitely be more cautious.

Tuesday's workshop was meant to review the findings from five earlier workshops held early this year to increase understanding on human trafficking, to introduce the contents of the Human Trafficking Act 2007 which are related to a formation of the committee, to facilitate the formation of an anti-human trafficking committee as well as to discuss the action plans that need to be undertaken by the said committee.

For the past few days, I was unable to publish posting in this blog of mine. Whenever I tried to sign in using Internet Explorer Browser, a dialogue poped out telling me that it not possible. I have now down loaded Mozilla Firefox and now using the channel to go surfing.
at 5:16:00 am 1 comment:

Have Palm Sail Will Travels 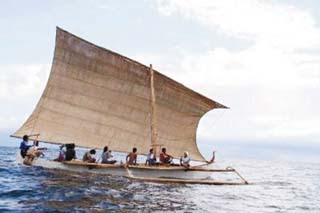 TAWAU (Sabah): A 10-man team led by a 60-year-old surgeon from Tokyo left Tawau Yacht Club, Wednesday, to continue their 200-day voyage on two handmade ancient palm tree sailboats to trace the routes taken thousands of years ago.
Prof. Yoshiharu Sekino and his team arrived here, Monday (JUne 8), after sailing 800km from Kampung Lambe, a small fishing hamlet in Sulawesi Island, Indonesia.
The voyage from Southeast Asia along the Black Current is aimed at tracing one of the paths believed taken by ancestors of the Japanese some 3,000 to 10,000 years ago.
The Black Current route was one of the three paths believed to have brought seafaring people from the Sunda Land area, which now includes Indonesia and Malaysia, to the Japanese archipelago.
The team comprising four Japanese and six fishermen from the Indonesian Mandar tribe started their journey on April 30 on the sailboats called Jomon and Pakur. Jomon is seven metres long and could accommodate four people while and Pakur nine meters long and accommodate six people. The sails were made of Palmyra palm leaves woven the traditional way used by Mandar sailors.
Sekino, who is also a professor of anthropology at Musashino Art University, had already explored the two others routes, namely the northern route from Siberia via Sakhalin Island to Hokkaido from July 2004 to August 2005 and then from October 2005 to March 2008, the continental route from the Himalayas via China and the Korean Peninsula to Kyushu.
Sekino said he wanted to explore the origins of their ancestors, whose inheritance could still be found in different places along these routes.
Speaking to the Daily Express before leaving, he expected the 700km journey from here to Kudat, the northern tip of Borneo Island, would take about one month.
They would also stop over in Sipadan, Lahad Datu and Sandakan. "After that, we will sail to Philippines and Taiwan," he said, adding they would travel a total 4,000km.
Sekino said their journey from Sulawesi to Tawau was a bit difficult as the wind direction was inconsistent. As the handmade sailboats fully depend on wind, they spent about 30 per cent of the journey paddling the boats.
"We also sail at night if there is a full moon," he said, adding that so far they had sailed through six nights.
He expected the journey onwards would be much easier as the wind is blowing towards north.
Sekino who took four years to plan the trip said initially it was estimated it would take them three months as they planned to arrive in Naha, Okinawa Japan on July 20. But due to many obstacles, the trip had slowed down by 100 per cent.
It would take them seven months or 200 days to complete the journey. "There are another five months to go," he said, adding they are sailing an average 25km per day.
The team is assisted by Indonesian, Muhammad Ridwan who is escorting them in a motorboat providing foods and drinks.
at 9:25:00 pm 3 comments:

The Sabah Fire and Rescue Department headquarters which is located next to a Chinese cemetery along the Kolombong highway in Kota Kinabalu.

I live in Kionsom, Inanam about six miles from Kota Kinabalu. Everyday I go to Tanjung Aru using Jalan Lintas. One `landmark' that had been always been `hunting' me is the Sabah Fire and Rescue Department's headquarters at Mile 5, Jalan Tuaran.

The building was built on a site sandwiched by cemetery. I had always been asking why and this question had been noticed by Federal Housing and Local Government Deputy Minister Datuk Haji Lajim Ukin during a visit recently.

I reproduced below a story on Lajim's as it appeared in the Saturday's New Straits Times.

KOTA KINABALU: Most people would be dead set against living anywhere near graveyards for fear of ghostly visits or bad feng shui.

Staff at the state Fire and Rescue Department headquarters, however, have to bear with the situation as their workplace is located next to the Chinese cemetery along the Kolombong highway (Jalan Lintas).

Here, the term "graveyard shift" takes on a life of its own.

"Sometimes, my men are a bit wary about being put on the night shift here. It becomes a point of contention or a joke," said department director Khirudin Drahman.

Not only is the location undesirable but Khirudin said it was also impractical as the location meant that no renovations or extensions could be done.
"It is not as if we can dig up the graves for any extension. But at least no one will complain about any noise!"

Fortunately, the men do not have to live at the site as their living quarters are located separately elsewhere.

State Housing and Local Government Minister Datuk Seri Lajim Ukin, who visited the headquarters on Friday, said that two other branches of the department -- in Tuaran and in Tambunan -- were also located near or next to ceme-teries.

"It's very unfortunate. It's as if they were given land that nobody else wanted."

Lajim said he had asked his ministry to look into the matter and investigate if there had been any misleading information given in the allocation of the land.

On another matter, Lajim said the ministry would be submitting a working paper to the cabinet outlining plans for Fire and Rescue Department volunteer teams in Sabah.

"These volunteer teams would be trained to deal with crises and fires in their areas.

"They can help control the fire until the firemen can reach the site.

"This is crucial to save lives and reduce losses."

He said 56 places in the state had been identified to have such teams but so far only 13 of them had active volunteer teams.

"Some of these teams have been provided fire-fighting equipment but we are looking at providing training and equipment for all the areas."
at 8:59:00 am No comments:

"Having the event in Kuala Lumpur will enable Malay-sians in the peninsula to learn more about the culture and heritage of the Kadazandusun in Sabah and the Dayak and Iban in Sarawak.

"We want to enhance national integration by helping all communities to learn more about the people of Sabah and Sarawak," he told a meeting with media editors in Kota Kinabalu, Sabah yesterday.

This year's celebrations was held yesterday at the Padang Merdeka, Kota Kinabalu which was launched by Head of State Tu Haji Ahmadsah Abdullah and attended by Deputy Prime Minister Tan Sri Muhyiddin Yassin.

The festival is a manifestation of Sabah’s economy, social and culture and should be appreciated not only by the Kadazandusun and Murut (KDM) community but also the state’s multi-racial population.

Although the festival is aimed at protecting the cultures and traditions, other communities can take the positives in line with the 1Malaysia concept inspired by Prime Minister Datuk Seri Najib Tun Razak.

The festival is proof of the strong unity and harmony of the people.

The Nnational Pesta Kaamatan celebrations to be held at Padang Merdeka, Kota Kinabalu and will be launched by Deputy Prime Minister Tan Sri Muhyiddin Yassin.
at 8:56:00 am No comments: